German flag carrier Lufthansa has the honor of flying the national men’s football team to its World Cup training ground in Oman. 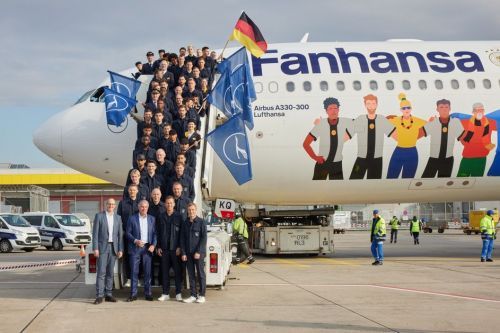 German flag carrier Lufthansa has the honor of flying the national men’s football team to its World Cup training ground in Oman. Players, coaches, and support staff were onboard flight LH632, which departed Frankfurt in the early afternoon of November 14th. Lufthansa’s CEO Carsten Spohr and CCO Stefan Kreutzpaintner joined the team on its journey.

The flight was operated by one of the airline’s Airbus A330-300s, registered as D-AIKQ, which is sporting a special livery to mark the event. The Fanhansa aircraft was unveiled by Lufthansa on November 13th, and will send a clear message in support of diversity and equality wherever it flies.

Flight LH632 normally operates from Frankfurt Airport (FRA) to Dubai International Airport (DXB) on a daily basis, departing Frankfurt at 13:30 and arriving in Dubai at 22:55. The return flight, LH631, leaves Dubai at 01:30 and arrives back in Frankfurt at 06:30. The outbound flight on November 14th, however, made a detour to Muscat (MCT).

According to FlightRadar24.com, D-AIKQ arrived in Frankfurt on November 8th, and had not then flown until the flight to Muscat, presumably so that it could undergo its makeover. Upon return to Frankfurt in the early hours of November 15th, the aircraft is scheduled to depart for Dallas (DFW) as flight LH438.

The same aircraft is expected to transport the team from Muscat to Doha for its first match next week, but this has not yet been confirmed.

In a statement, Lufthansa emphasized the importance of the Fanhansa livery, and what it means to the airline, saying,

“Lufthansa is a byword for openness, tolerance, diversity, and bringing people together. The company enables its customers from all nations and cultures to connect, and welcomes everyone aboard, regardless of gender, age, ethnicity, religion, nationality, identity, or sexual orientation.”

Previous Lufthansa World Cup liveries have focused on passion for sport and support for the national team. However, with the Fanhansa livery, the airline and the German team are sending a clear message to the host nation.

The 2022 FIFA World Cup has so far been plagued by controversy, with many observers highlighting the lack of workers’ rights for those who built the tournament infrastructure and the host country’s track record on LGBTQ rights.

As such, brands around the world have come under criticism for their support of the World Cup. Lufthansa, however, is keen to use its presence to spread a message of tolerance and diversity.

This is not the first time that Lufthansa has showcased its commitment to diversity – earlier this year, the airline flew its Lovehansa Airbus A320neo aircraft, promoting LGBTQ rights around the world.