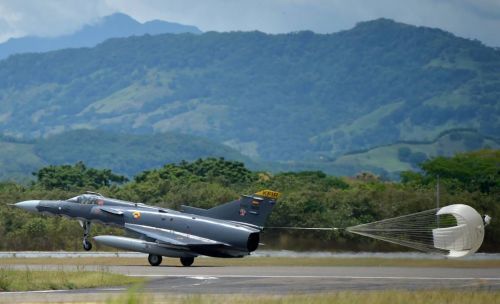 Petro’s decision may come as a surprise given his stance earlier this year on the campaign trail, when he said the purchase of combat aircraft or other military hardware would not be a priority during his time in office, if elected.

Military sources in the capital Bogota, speaking on the condition of anonymity to protect their careers, told Defense News that the credit for Petro’s U-turn belongs to Gen. Luis Carlos Córdoba, the chief of the Colombian Air Force. They explained that Córdoba convinced Defense Minister Iván Velásquez about the urgent need to replace at least part of the Kfir fleet, which will begin retirements later this year, and Velásquez in turn persuaded the president.

Since 1989, Colombia has acquired 24 Kfir jets, made by Israel Aerospace Industries. To counterbalance the acquisition of Sukhoi Su-32 fighters by Venezuela, Colombia’s Kfir fleet underwent upgrades between 2009 and 2017 performed by IAI’s Lahav Division.

Colombia’s modernized Kfirs are possibly the most advanced fighter jets with the most capable systems in service in South America. But the age of the airframes is taking its toll; between 2012 and 2014, multiple aircraft were lost in accidents, at one point grounding the entire fleet. Extensive maintenance support from IAI brought the aircraft back to service.

The Colombian government is now considering how it can afford to buy new fighters. The president is already pressing for investments in social issues, and about 25% of the country’s annual budget is earmarked to pay off debts.

“President Preto came into power making many promises about social development spending, and has a core group of supporters that are not friendly about buying military equipment. On the other hand, the Army and Navy also have need of modernization,” Saumeth told Defense News. “So either nothing will happen, or [there will be] a not-so-good, sort-of-mediocre stopgap solution.”

Colombia previously received offers of secondhand Eurofigher Typhoon and Dassault Rafale fighters, but the Air Force, which prefers single-engine aircraft, appears focused on Lockheed Martin’s F-16 and Saab’s Gripen. The government has already received offers of both new aircraft of the latest variants as well as secondhand, upgraded options.

One of the military sources told Defense News that “most likely a first batch of 12 aircraft will be procured” and that “secondhand offers of modern airframes with a large service life remaining and significant upgrade potential are surely to attract more interest than before.”