The Civil Aviation Administration of China (CAAC) on Tuesday granted certification to the Z15 helicopter, the country's first homegrown, medium-sized helicopter model for civil use. 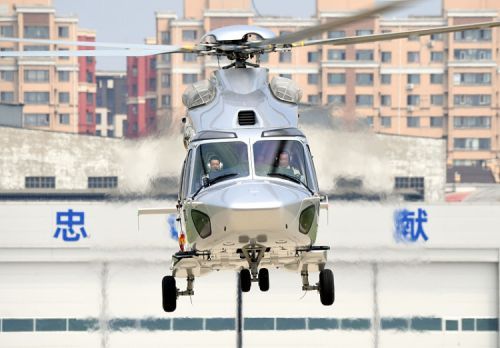 The latest move marked the successful completion of the development of the Z15, paving the way for the helicopter's market entry, according to the Aviation Industry Corporation of China (AVIC).

The Z15, also known as the AC352, was developed by AVIC Harbin Aircraft Industry Group Co., Ltd. under a cooperation program between AVIC and Airbus Helicopters. It can carry up to 16 passengers with a 7.5-tonne maximum take-off weight and a maximum range of 850 km.

It is China's first civil helicopter developed, tested and verified under the requirements of the country's newly-revised Airworthiness Regulation of Transport Category Rotocraft.

The helicopter installs the WZ16 engine jointly developed by the Aero Engine Corporation of China and Safran Helicopter Engines.

The Z15 (AC352) adds to China's capacity in the aviation sector. It will support the construction of the country's emergency rescue system, ensuring the safety of people's lives and property while supporting socio-economic development.

"This helicopter model has significant adaptability to various environments and missions, with high search and rescue efficiency," said Lu Weijian, AVIC senior expert and chief designer of the Z15 (AC352).

It can rescue up to 14 people at one time, accommodate two stretchers in its wide cabin, with maximum external sling loads of 3 tonnes.

"This means it will be capable of playing diverse roles in emergency rescue missions, by delivering key supplies, transporting injured people, and even carrying excavators into disaster-hit areas to facilitate rescue work," said Lu.

The Z15 can be used in a wide range of roles, such as emergency rescue, medical rescue, transport for offshore oil platforms, maritime search and rescue, and short-haul transport, according to Liu Yongsheng, deputy chief engineer of the AVIC Harbin Aircraft Industry Group Co. Ltd.

"It is currently embarking on a new journey of entering into the market. We are establishing a lifecycle service system for future customers," Liu said.

The Z15 successfully completed its maiden flight on Dec. 20, 2016. At the end of 2019, it began the flight-test journey for airworthiness certification around the country to verify its performance in various terrain and weather conditions.

The AVIC aims to develop a series of Z15 helicopters. By now, its search and rescue configuration model is under development. More configurations for firefighting, emergency transport and medical rescue missions are also expected during the 14th Five-Year Plan period (2021-2025), according to the AVIC.