After departing the Farnborough Airshow, Embraer’s latest aircraft, the E195-E2, made its debut landing at London’s iconic City Airport (LCY); demonstrating the aircraft’s steep approach capability. The visit, in anticipation of the aircraft’s certificati

After departing the Farnborough Airshow, Embraer’s latest aircraft, the E195-E2, made its debut landing at London’s iconic City Airport (LCY); demonstrating the aircraft’s steep approach capability. The visit, in anticipation of the aircraft’s certification for steep approach into London City at the end of this year, included ground handling tests and other preparations for the aircraft’s first scheduled flight into LCY, expected shortly after certification. 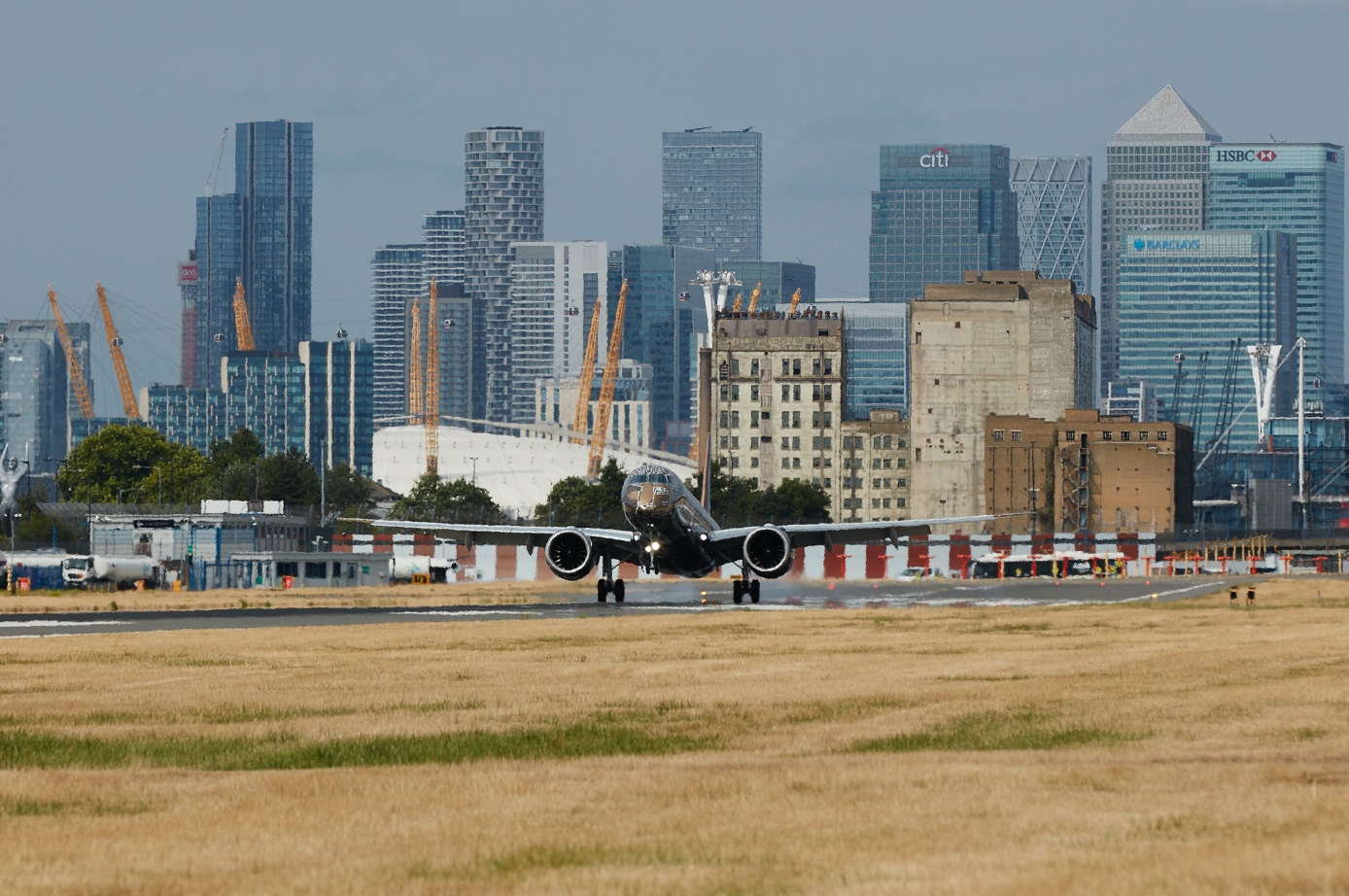 The visit demonstrates the importance Embraer places on being able to offer LCY capability to airlines with the E195-E2 - the E190-E2 began operations into LCY with in September 2021. The airport is a vital component of London’s wider connectivity, and Embraer aircraft are uniquely able to manage the challenges of LCY operations; Embraer aircraft account for 85% of all LCY operations on routes as diverse as Edinburgh and Mykonos.

The aircraft, the largest in the E2 family, seating up to 146 passengers, was flown into LCY on a 39% blend of Sustainable Aviation Fuel. Embraer’s test aircraft, featuring the eye-catching black and gold TechLion livery, was welcomed with the traditional water salute from London City Airport’s fire service.

Alison FitzGerald, Chief Operation Officer at London City Airport, said, “The arrival of the E195-E2 signals that we are on the cusp of welcoming more new generation aircraft that provide world class environmental performance, carry more passengers, and have the potential to connect this airport with more global markets.

This moment also represents the strength of the partnership we have with Embraer, and together, we are pushing the envelope of what’s possible at this airport, as at 146 seats and a wingspan of 35 metres, it will be comfortably the largest aircraft to operate from LCY.

While the immediate focus is certification, we are hopeful that we will see the first E195-E2 in operation next year with KLM which will be real cause of celebration.”

Arjan Meijer, President and CEO Embraer Commercial Aviation, said, “London City feels like home for Embraer. It’s a great airport, not just because it’s fast and efficient for passengers to travel through, but because its unique challenges as an airfield demonstrate the excellent performance of our E-Jets. We are immensely proud to be the dominant aircraft brand at LCY, and look forward to seeing scheduled services begin with the E195-E2.”

The E2 is the most efficient single aisle aircraft flying today, saving up to 25% carbon dioxide emissions compared to previous generation aircraft. Over 30% lower CO2 emission per seat versus jets of current generation operating at the airport

In early July, Embraer and Pratt & Whitney successfully tested a E195-E2 aircraft on 100% sustainable aviation fuel (SAF). With 100% SAF, the 25% reduction in emissions can be increased up to an impressive 85%.

In terms of noise reduction, the E195-E2 offers an over 65% reduction in noise footprint area compared to jets of current generation operating at the airport.

In Sept 2021, the E190-E2 began its commercial flights into London City Airport with operators such as Helvetic Airways. This follows its Steep Approach certification in June 2021, a requirement to operate at London City Airport.

LCY’s runway length measures just 1,508 metres and descent angles are up to 5.5 degrees. Currently, 85% of all flights landing or departing LCY are E-Jets or the E190-E2 operated by carriers such as BA Cityflyer, KLM Cityhopper, and Helvetic Airways.